The words of our Lord, God, and Savior Jesus Christ, as recorded in the Gospel of Luke:

As a man was going down from Jerusalem to Jericho, robbers attacked him and grabbed everything he had. They beat him up and ran off, leaving him half dead.  A priest happened to be going down the same road. But when he saw the man, he walked by on the other side. Later a temple helper [a Levite] came to the same place. But when he saw the man who had been beaten up, he also went by on the other side.

A man from Samaria then came traveling along that road. When he saw the man, he felt sorry for him and went over to him. He treated his wounds with olive oil and wine and bandaged them. Then he put him on his own donkey and took him to an inn, where he took care of him. The next morning he gave the innkeeper two silver coins and said, “Please take care of the man. If you spend more than this on him, I will pay you when I return.”

Then Jesus asked, “Which one of these three people was a real neighbor to the man who was beaten up by robbers?” The teacher answered, “The one who showed pity.” Jesus said, “Go and do the same!” (Luke 10:30-37 CEV)

The prayer of a servant:

My Lord God, I confess that I am the priest and the Levite. Not only did I walk past, I walked away. I was too busy, too frightened, my heart was too cold. In my own abundance, I was too poor in spirit to bear the cost. In my own comfort, I was too complacent to suffer any inconvenience. It was the Samaritan, a man despised and without pride of position or parentage, who was faithful and loving and who gave of himself sacrificially. 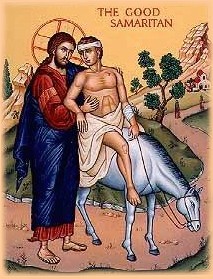 Father God, in your mercy, say that it is not too late for me. Another may have borne the burden, but I can go to the inn and sit with the traveler while he heals. I can bathe his wounds and feed him and lighten his spirit until the Good One returns.

Grant me the grace to do that little service with a grateful heart; please stand with me so that I will not walk away and shun the greater service the next time.

Lord Jesus Christ, Son of God, have mercy on me, the sinner. Amen.